Superjet disappears south of Jakarta: My notes and comments

This article is Part 1. Part 2 can be found HERE.


It is not a good day. Sukhoi Superjet RA97004 disappeared south of Jakarta this afternoon. At the time this article is first published on this blog, it is not yet found. Several friends almost went on the flight, some went to the earlier flight, some cancelled. Lucky I was not invited because otherwise I would have gone on it. Unfortunately, a friend is on that flight, and some others I know was onboard too.

Earlier, I made the following tweets:


The first one was received from someone at the crisis center at Halim. It has not been confirmed by the official press release. Further investigation into that lead turned up as the SAR heli pilot thought he saw something but cannot investigate closer due to the need to abort due to bad weather. The air search is abandoned for the day/night. Ground search party has been dispatched involving 30 teams of 20 people each. Mt. Salak is very well trekked by rescuers etc. BUT, it is also a tricky place to navigate overland. Even experienced team with GPS get lost during the day. So expect the night ground search to be painstakingly slow despite their best efforts. The last thing we want is "search the rescuers."

There are questions, one of them:


There are no information that the ATC granted the request. The aircraft would be handled by Jakarta Approach South/East or Jakarta South Sector (if they planned to go south of the mountain range). Given the time of day, I suspect whichever ATC was handling the flight, are swamped with 07L/R departures to south east from CGK or handling sequencing for 25L arrivals, as well as low level traffic inbound to Halim airport. 1 lone flight to the south under radar control, would be the highest priority. Their request, might require several calls. It's possible that the crew took their own action.

And another question in Airliners.net forum topic on this accident:
For folks like me unfamiliar with Indonesia locations and such - the 'crash' site is apparently about 30-35 nm almost due south of the Jakarta airport... The plane was 30-35 miles from landing - so descending in that manner would be normal. However if the plane was a few miles south of where the pilots thought the plane was located - it could have descended too quickly.

I've flown around that area a lot in the past. It's nice and scenic in VMC. But between Mt. Salak and Mt. Pangrango, one has to have their wits around and not have a lapse of situational awareness. Some very strange winds are up there, and conditions are unpredictable even in VMC, and in IMC, it's damn awful. I must thank my fortunes to not have to go through the pass between those two mountains anymore these days!

Taken from 9 yrs ago:

This is Mt. Pangrango, a higher (almost 9900ft peak) but not as steep as Mt. Salak (7200ft peak). Lots of little valleys to search through. U'd be hard pressed to try and force land a jet and end up in 1 piece there.

Flying to the south of Jakarta, is dangerous if only armed with a Jeppesen Map. No terrain depiction, only the MSA is there. I picked this from a Lido chart:

As you can see, Mt. Salak and Pangrango are just outside the MSA limit. Note MORA is 11900 and 10300. On the Jeppesen, this is not depicted on Halim Airport approach charts, nor on the STAR charts for HLP or CGK.

A witness onboard an earlier flight told me that the previous flight was departing and arriving Halim 24. The pilots only had the approach and airport ground charts. Seeing the Nav Displays on the previous flight, it looks like they simply planned to depart, go along R206 airway (Radial 195° from Halim) until about 30NM and turn back. 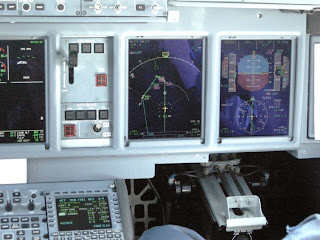 If they had reached 10000 feet as reported, they would have had to descend prior to reaching the 30NM mark. Sounds easy enough. BUT, late afternoon in that area is normally not good for flying. I've seen clouds "collapsing" down the side of Mt. Salak and spread across and cover the whole pass towards Pangrango before (I turned back... being in an unpressurized prop twin w/ no WXR). Quite often in the mid afternoon, clouds would cover both mountains, and only reveal Pangrango, and Salak is totally covered... looking like a big cumulus over small area undercast... (I used the term, "Cumulus Granitus" a lot after seeing that).

If these guys were only armed with Jeppesen approach, STAR, and enroute charts, a simple "fly out along airway R206 to 30NM and turn back", would be fine in VMC, but deadly in IMC and bad localized weather. A simple urge to duck under over there is hard to overcome unless you know the terrain there. The crew was unfamiliar with the area. Last time someone crashed into Mt. Salak, it was an air force C-212 on the way back to Halim from the south coast after some remote sensing equipment testing. Been there, also did the same, test remote sensing equipment down the south coast, heading back, huge temptation to simply press, "Direct to" Halim airport on GPS or FMC.

My crew used to hate me for forcing them to plot a course through the pass on the GPS and Mission console display, added with the instructions "In IMC Do not proceed direct HLM unless west of radial 200° HLM and within 20 nautical miles of HLM. Strict adherence to planned course through the pass in IMC, maintain 6000 above until 20 nautical miles from Halim. If GPS u/s or unable to maintain 6000, revert to alternative IMC return plan" (which involved a long detour west to avoid terrain over 1hr30 extra on that prop). It wasn't until they went through the pass in IMC did they appreciate the instructions. On a bad day, the pass collects northerly winds like a compressor on the north side, then spews it up the middle and down the sides in an erratic manner. I went through it in IMC once on one of those bad days, I'd rather not go through that again ever. Looking back at it now, even 6000 was probably too low.

The fact remains, the aircraft disappeared in a remote area albeit very near Jakarta. There has been numerous rumours on where the aircraft is and that it had been found. One, is relatively disgusting, saying that it was found in two pieces and bodies strewn around the place. Disgusting misinformation.

The area is quite remote. The areas above 3000ft are often covered by cloud in afternoon. And very few aircraft traffic go by there on a given month, let alone in a day! The military from nearby Atang Sanjaya Airbase also don't go down that way often either.

Let's hope tomorrow morning brings clear weather for the air search to continue and the aircraft be found quickly, survivors treated as soon as possible, and the dead be laid to rest.

It is not a good day at all!


UPDATE 1: 2012-05-08 0310UTC.
Wreckage found, spotted from the air. Ground SAR teams reported less than 1 kilometer from scene according to Detik.com article. Aircraft appears to be relatively intact but need ground teams to assess the extent of damage and seek out survivors inside. This report was made public by Deputy SAR Ops, Hadi L. SAR will try to evacuate survivors and the deceased by air if and when possible.


The report also contradicts previous rumors of aircraft found split in two and bodies strewn around the place! As I said before: Disgusting misinformation not welcomed anywhere! 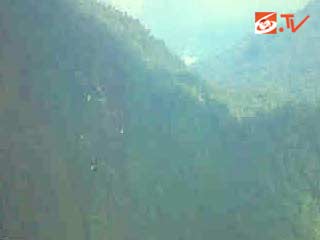 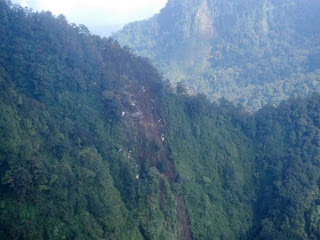 It is obvious that the aircraft hit a cliff and that survivability is slim if not impossible. Analysis will come later after I can come to terms with the pictures. Once again, RIP those on board. May God Give Strength To Those They Left Behind.


Article continues HERE.
Posted by Unknown at 3:17 AM